Actually this post was inspired by one corner of the morning program “ZIP” on Nihon Telebi. It was about finding out the differences in the food in our everyday life that is thought to be the same (that is most people can’t tell the difference). One of the topics raised is Milk tea and ROYAL milk tea!

To be honest, I have always wondered how can tea be “royal” and what makes it royal when it looks and tastes the same as the general milk tea. I thought it was only the marketing scheme and the printing creativity LOL Turns out, there is a difference anyway.

THE DIFFERENCE lies in the making process. The tea master in a specialist tea shop enlightened us…
Milk tea >> boil the water, put in the tea pot, drop the tea bag or tea leaves, pour the tea into the cup THEN ADD MILK
Royal milk tea >> put tea leaves AND MILK in a pot, boil together before serve

Royal milk tea was first introduced in Japan 55 years ago in 1965 at a tea shop called “Lipton” in Kyoto. Actually, Japan gave birth to this drink, and to give it a little fancy luxury feeling, the word “royal”, meaning to convey the Britain royalty, was added.  So….just to be clear, there is definitely NO royal milk tea thingy in any cafe menu in a tea country like England. 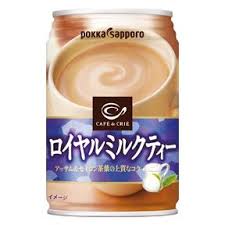 And…there are also the normal milk tea ones…those without the word “royal”…Now I’m really confused if people can actually tell or even care to tell the difference. lol